iOrgsoft SWF Converter aims to let users to enjoy funny and vivid SWF animated video anytime and anywhere on their favorite portable devices such as iPod Touch, iPad mini, iPhone 5, Samsung Galaxy S4, Note 2, Note 8, PSP, etc. To achieve this, it allows users to convert SWF videos to various video formats like MP4, MOV, AVI, FLV, 3GP, H.264 etc. The software is trying to provide as many output formats as possible for users to satisfy the compatibility of their portable devices. And due to this, users can also smoothly import SWF files to common editing software like iMovie, FCP etc for personal customization.

If you are game lovers and like to download many SWF animated games, you can make a game tutorial video to teach others how to play the game with the tool. The tool allows you to play the SWF game during conversion. And the process about how you play it will be recorded and converted at the same time. You can share your game experience by uploading the converted video.

I am a big fan of animation videos so this software is very useful to me. Many animation videos I've download are .swf files, difficult to playback wihtout flash player. So I need to convert them to other formats.
- by Ian

a good converter, really can convert swf to quicktime mov, successful playback. just, if it can do more than crop and add watermark, I will like it more with 5 stars.
- by Sam

This SWF Converter can convert SWF to certain formats for Windows apps.

It allows you to transfer the downloaded SWF video files to Windows apps to edit.

It allows users to convert a certain time-length segment out of the imported file. Users can stop the conversion anytime and they will get the time-length converted file as output. 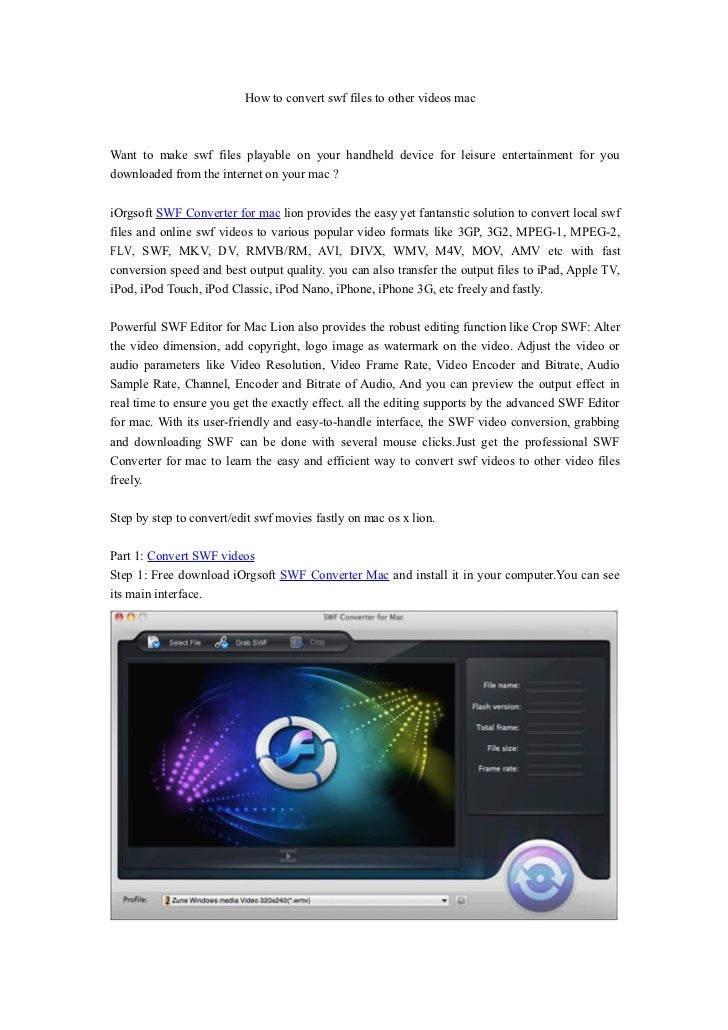 Crop videos by cutting off the unwanted part of the video, such as the black frame. Add watermark by choosing an image from the local folder and adjust its transparency.

With user-friendly interface, it is easy to use without any complication process, which leads to fast conversion speed.

Why Choose iOrgSoft SWF to MP4 Converter for Mac

Can’t playback downloaded SWF files on your iPad, iPhone, iPod Touch or other android devices like Samsung Galaxy S4, Note 3, etc? Unable to import SWF video to iMovie for further editing? Encountered trouble when embedding SWF videos to your own website? iOrgSoft SWF to MP4 Converter for Mac helps you to solve all the problems mentioned. Easily and professionally, it can convert SWF format to the more easy-to-play MP4 format for different uses. Meanwhile, it can rip soundtracks as well as images from SWF videos. Besides, it is also a SWF game recorder which allows you to play, record and convert .swf game.

Convert SWF to MP4 on Mac

It lets you do cropping and add watermark or logo picture to protect your copy right.