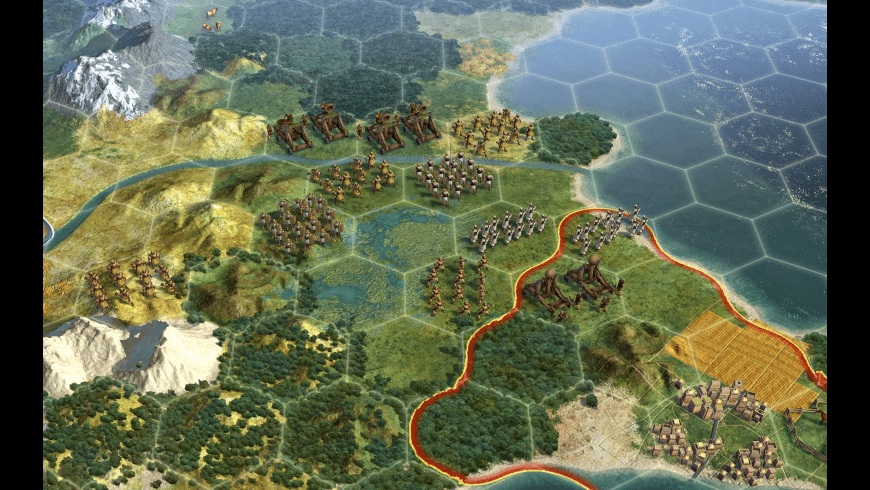 The Gods and Kings of our world govern many of us in our lives. These greater and more powerful beings have influenced civilizations in their understanding of the mysteries of life for the past millennia. Without these sovereign and majestic powers, it can be argued that society would not have advanced as far as it has. With the collaboration of Aspyr and Firaxis, players are able to become one of these powerful forces in the newly released Gods & Kings expansion pack for Civilization V.

This pack is very different from those that have been released in the past. The older add-ons were very limited in what they provided, mostly adding new scenarios, civilizations and maps to the already vast amount available in the retail copy. That’s not to say that previous additions weren’t any good, just that they lacked the depth of content required to breathe new life into the game. If I illustrate this in a metaphor, rather than adding more bedrooms to the house of Civilization V, these previous packages only added new furniture and decor. With Gods & Kings the developers have gone back to the drawing board and renovated the entire house for loyal Civ fans.

The most obvious addition when you start a new game is the new Religion function. While absent from the original release of Civilization V, it was one of the key features of the previous iteration, Civilization IV. To those users who were very annoyed by the lack of the feature back in 2010, I can definitely say it has been well worth the wait.

When I began my new civilization I immediately started down the path of the religious victory. Like any other way of winning in the game you have to balance your choice with other aspects of your civilization, otherwise you’ll be trampled by your competition. Religion is no different. If you divide your focus in the wrong fashion your surrounding foes might beat you to the post. As soon as the game starts you begin with a new form of currency called 'Faith' to spend on your empire. At the start you have none, with an income of +1 per turn. This limitation is also combined with the restriction to only spend the currency on religious goods such as Cathedral buildings and Missionary units. However, if you choose to establish and develop a religion, you can eventually spend this faith on military units and other items as well.

A tip for those who want to gain faith quickly: As soon as you found your first city, make your people start constructing the ‘Stonehenge’ wonder. It comes with +5 faith per turn. This is 5 times more then the next building that you can create at the start. You might have to suspend your building of your armies a little while, but it is all worth it in the end when your religion tramples the rest in the world.

After establishing my large income of faith early in the game I was the first in the game to make a Pantheon. This is the first belief that you choose for your people, and is like the scaffolding for the religion that you may choose to create. Pantheons are more than just the lead up to your religion. They are in essence a special spiritual power for your empire. Some of these powers allow you to enhance production, defense, offense and culture. The pantheons are unique to your Civilization, which is a great incentive to get in early. If you know your strategy early in the game, then these Pantheons can give you bonuses which can help you achieve victory. 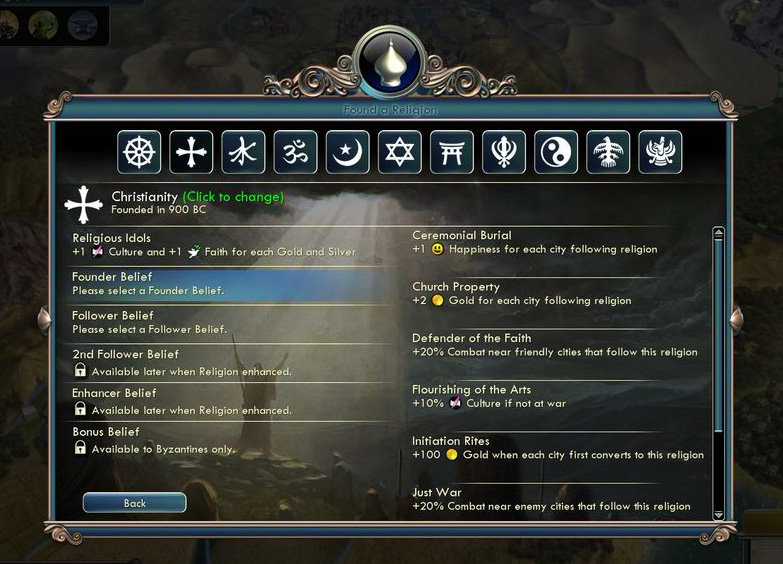 Pantheons aren’t very difficult to obtain and quickly you’ll see your enemies add their on Pantheons as well. It’s the next step where you have to choose whether it’s worth your while. After you gain a substantial amount of faith you will be able to purchase a “Great Prophet”. This addition to the Great Person family, is the main way in the game to establish a religion. When this occurs you will be asked what religion to choose. They cover pretty much every major religion on Earth. But, it must be said that which religion you choose only gives you a different logo. If you choose Buddhism or Christianity it doesn’t have any effect on your religion as you choose your beliefs separately to the name. And even the name can be customized.

The beliefs that you choose are very similar in their worth, it remains the choice of the player to determine what is most valuable to their civilization. Each new belief that you add to the religion adds a greater power. These beliefs can only be added through another “Great Prophet”, which costs an even greater amount every time one is used. This flexibility of powers and equality of their impact opens up the great part of Civilization, which is a true customization of what you want your civilization to be. Since I was worried about a neighbouring civ, I chose beliefs that enhanced my combat power by 20% in cities which were dominated by my religion. Although I chose the more militant option, these beliefs can also aid other aspects of your civilization.

Once these parts of your religion are established you are basically left up to your own devices to keep it alive and dominant around the world. If you start early it is a definite advantage, but it requires constant work and maintenance in order for it to survive against other fighting religions in the world. It can also lead to an obsession of trying to make sure that yours is the only one in the world. From personal experience this is a tough feat to obtain. I couldn’t do this in my playthroughs. However, with a pure focus on this aspect, it is possible.

Overall, this complex new mechanic is a welcome change. It adds a great enhancement to gameplay. There are no real complaints that I can find from my experience, other than a slight annoyance that this wasn’t introduced in the original release.